This is the Job of a Web Developer

This is the Job of a Web Developer 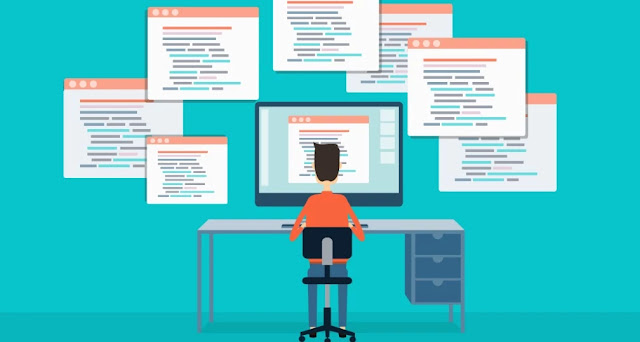 Some of you might want to become a web developer and start learning coding. But there are many types of programming languages. How do you know what you need to learn? Of course, you must know in advance what the task of a  web developer. Web developer is a person who creates programs and applications for the World Wide Web.

Web developers know how to create a website from scratch, generate special code if you really need some features of your website. Extend all sections, from website layout to website features. Put simply, a Web developer is someone who is responsible for creating and managing websites.

But if you talk more about developers, you will find that the work of Web developers is very broad. Two terms that you may often encounter when reading a developer's assignment are the back-end Developer and front-end Developer. So what's the difference?

Front End is the front of the website that is accessed by users. What you see when you open a website, starting with color, writing fonts, drop-down menus, and cursors on the website, is set using HTML, the CSS coding language and JavaScript is managed by your computer's browser. This is what is meant by front-end.

The front-end developer is the person responsible for the site's frontend, including compilation and administration of the site so that the user interface (UI) and user experience (UX) are good for the user. User application developers must understand three main programming languages, namely HTML, CSS, and JavaScript.

Besides understanding in this language, front-end developers must also be familiar with various frameworks such as Bootstrap, AngularJS, Foundation, Backbone, and EmberJS which function to ensure that content always looks good on all devices or mobile devices. In addition, front-end developers are also expected to know libraries such as jQuery and Less that make code so they can be used more efficiently.

If you look at job descriptions from front-end developers, many also ask for experience with Ajax, a technique that is widely used for JavaScript so that web pages load dynamically.

it's about front-end. Then how does the website front end still exist? Where is the database stored? This is where back-end works.

Back End sites consist of servers, applications and databases. The back end developer is responsible for building and managing technology that supports these three components. This is done so that the front end of the website can be created.

To ensure that communications between servers, applications and databases run smoothly, back-end developers typically use server-side programming languages ​​such as PHP, Java, Ruby, Python, and .Net, to build programs and tools such as MySQL, Oracle, and server. SQL

It functions to search, store and convert data and present it to the front end coding. Usually job descriptions for back-end developers are familiar with PHP work frameworks such as Zend, CakePHP and Symfony, and experience with version control software such as SVN, Git or CVS, and experience with Linux as a development and deployment system.

Regular back-end developers use this tool to contribute to web applications with clean, portable and well-documented code. However, before you write code, back-end developers need to collaborate with other teams to find out the purpose of this website. That way they can manage whatever technical needs are needed and provide the most effective solution for the technology.

Then does the developer only need to master one of the several categories above? Not really. If you study web development, usually you will learn everything. Front end developers still need to know back end skills and vice versa. Sometimes, developers must also be generalists. This is what is called a full stack developer.

This role was first introduced by Facebook's engineering department in 2010. Full stack is a developer that can work cross-functionally, namely front end and back end. Of course if you can do both, you will be able to find more opportunities for work. But to become a Full stack developer, there are many problems that must be faced.

The full stack mostly functions like a back end, which is on a website server. But they are experts in front end languages ​​who manage the appearance of websites. Usually, they understand all programming languages ​​from HTML to Python.

Although it depends on the project, the front end must have a deep understanding of how the website works. For example to manage a Linux server, write server-side APIs, use JavaScript for front end purposes, and use CSS to design websites.

By using various programming languages, Full stack must be able to provide solutions for front end and back end. In essence, the Full stack will take full responsibility for the UX website, from the appearance to the loading time of the website.

Web development is actually a fairly broad field. But whatever type of development you want to master, you must have attention to detail, fast learning skills, problem solving skills and solid communication to succeed.

Web development can be a good career. With a growing industry and digital technology, web developers will certainly need a lot.