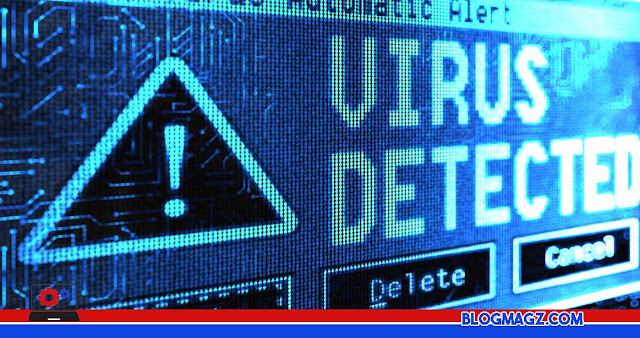 Blogmagz.com - The development of technology and the emergence of various new software that makes human work easier, followed by the emergence of viruses on computer devices that are increasingly rampant. ike a "Malware" virus that attacks computer devices very quickly. Up to millions of computers have been infected by a virus that uses a previously undetected language program. Not only malware, there are still many of the most dangerous computer viruses in the world.

The following are some of the most dangerous types of computer viruses in the world:

Jerusalem is a type of computer virus that was detected in 1987. This virus attacks MS-DOS and infects the run file that is being worked on. As a result, all program files contained on the hard drive are deleted. This virus is known as the “Friday 13th Virus” because it infects hard drives and deletes files on Friday the 13th.

The second type of dangerous virus is Morris, which is a type of virus that infects more than 6,000 computer devices in the United States. Even some NASA computers were infected with Morris. Morris attacks and disables network resources, resulting in damage and losses of up to tens of millions of dollars.

Computer virus "Code Red" is known since July 15, 2001 that attacks the Microsoft IIS web server. Code Red tampered with the web page, then left text that read “Hacked by Chinese!”. This virus caused a loss of up to USD 2 billion that infects almost all computers in the world.

Melissa is a type of virus that is sent via email to all email users. This virus can multiply and spread in Word and Excel files. Melissa managed to infect about 20% of computers worldwide. What's more dangerous, because this virus can spread viral emails by itself or automatically to email users. This leads to overloading of internet servers.

Despite the catchy name, Love Letter is not really a love letter, it is a vicious virus that spread in the year 2000. This virus works via email that uses the subject "I Love You" and is followed by the body of the text and attachments.
When you open the attachment that is sent, it will automatically share the email and send it to other email addresses and email users. This virus can also delete files on your device that have .jpg and .jpeg extensions.

This virus spreads on computer devices and causes denial of service in some internet hosting. This is what makes internet traffic drop drastically. SQL Slammer started spreading since January 25, 2013 and growing very fast within 10 minutes. One of the victims of the SQL Slammer virus is the Bank of America ATM. This vicious virus will usually attack Microsoft SQL Server which has a random IP (Internet Protocol).

MyDoom is considered as the cruelest virus in 2004 that infected more than one million computer devices. The MyDoom virus is spread via email with catchy or bouncing messages. When the user opens the email, the computer will automatically be infected immediately.
This virus will steal email addresses, and automatically forward the email to other users as the next target victim. Other email recipients who become victims, will also automatically spread to other users. So that this virus is increasingly widespread and infects computer devices.

The Agen.btz virus is spread via thumb drives, then it will install malware and steal some important data. This virus is also known as Agent AWF and attacks Microsoft Windows. Agent.btz causes great loss to computer owners, because important data that they have disappears immediately after the virus infects the device.

This virus is likened to a remote access Trojan that will control infected computer devices. Computers infected with Poison Ivy allow hackers to carry out their actions to control computers remotely. Hackers can control, manipulate content and files, and even access the webcam and speakers to record what you do.

Storm Worm is a type of Trojan ouse virus that infects computers and first appeared in 2006. Storm Worm spreads via email which contains a virus link. This is what makes many email users complain about spam files that enter their addresses. Computers that have been infected with Storm Worn will be controlled by hackers remotely.

In mid-September 2001, Nimda emerged as a virus that spread through the internet. Starting from the Web, Email, File Sharing by taking advantage of security holes on the server from the Microsoft Web IIS (Internet Information Service). This virus is capable of crippling thousands of computer devices in the world.

In October 2018, Conficker first appeared again and attacked the Microsoft Windows OS. The spread of this virus is very fast to infect 2.5 million computers on January 15, 2009. With super high speed, on January 16, 2009, there have been about 9 million computers infected with Conficker. Conficker attacks more on Windows XP and Heinz Heise devices. The purpose of the creation of this virus is to disrupt security and configuration settings.

In mid-2010, a Supervisory Control and Data Acquisition (SCADA) System was attacked by a malicious computer virus called "Stuxnet". This virus causes damage to machines in various facilities, even the giant Uranium washing machine in Iran.
This virus was detected and discovered in 2010, but Stuxnet is believed to have been infecting computer devices in Iran since 2009. The viciousness of this virus has caused disruption to internet networks around the world.

Furthermore, no less dangerous is the CIH virus, known as Win9x.CIH or also known as the Chernobyl virus. For the first time, this virus was discovered in Taiwan in June 1998.This virus works by tampering with the BIOS of your computer device so that it cannot boot. CIH is a virus that is difficult to detect, so it is difficult to overcome.
Dangerous isn't it? If some of the above viruses infect your device. These are some of the most dangerous computer viruses ever.
#Tech
Share
Comment