Yesterday, Google just released their latest update with Widget support on iOS 16. There are already six Google Apps services that get similar support, now it's YouTube's turn to get the latest Widget support on iOS 16, Sunday (16/10).
After finally releasing its latest update for YouTube on iOS 16, now YouTube users can immediately add Widgets on the Homescreen to make access much easier. The UI display given by Google is also very attractive and follows the impression of the iOS operating system. 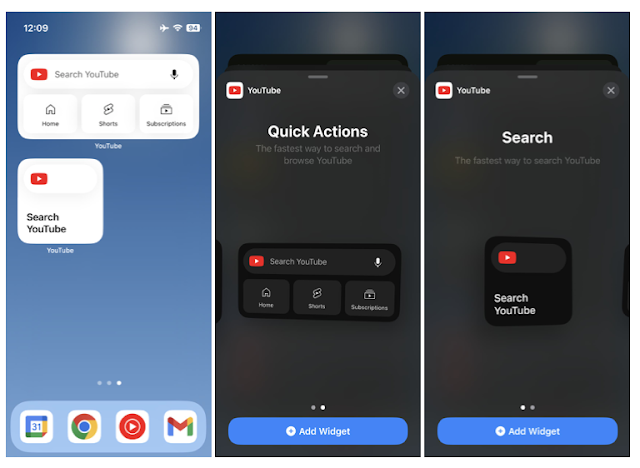 The widgets presented by YouTube also have several collections, where there is a Quick Actions feature that will display a number of shortcuts with a unique look. YouTube users can directly access Home, YouTube Shorts and see the subscribed YouTube channel.
YouTube also provides two different modes for its appearance, where users can directly use Light Mode and Dark Mode. Interestingly, this look will be adjusted when users choose one of the themes in iOS 16 where Light and Dark Mode are available.
The second Widget UI display is the Search by YouTube feature, so when users install this Widget on the Homescreen, users can immediately access it to search directly for videos on YouTube. Therefore, this access is considered more likely to provide quick access to search for types of videos on YouTube.
However, this second feature is considered not so used because it is available in the features of the first Widget. For the first Widget, YouTube displays four types of features, where there are Search, Home, Shorts and Subscriptions features. However, the use of this second Widget will be maximized when you want to use a smaller Widget size.
Quick Actions has a large size, which includes up to 4×2 and 2×2 for the dimensions of the Search Widget. YouTube users on iOS 16 can immediately apply it and adjust it to the size that fits on the Homescreen.
With this, YouTube has become the seventh Google Apps service and joins other services that get Widget support such as News, Drive, Gmail, and others.
What do you think? If you are one of the iOS 16 users then you can directly use the Widgets collection from YouTube.
#Youtube
Share
Comment