Suggested Actions Will Be Presented in Google Chrome

Suggested Actions Will Be Presented in Google Chrome

This October, Microsoft has released their support for Windows 11 22H2 Moment 1, which presents Suggested Action as an additional action. Rumor has it, Google Chrome will also get similar support from Microsoft, Friday (25/11).
Microsoft does provide quite a lot of their excellent features for Windows 11 22H2, one of which is by presenting the Suggested Action feature for users of the latest Windows operating system. This feature can be used as an additional feature.
This feature is quite interesting and helpful to use, especially when we copy a date or sentence in Notepad, where later it will display the Suggested Actions used as an additional option.
For example, when we copy a date, Windows 11 22H2 will present the Suggested Actions feature to give the user a choice in assigning the date to the system. So, that date can be used as a follow-up agenda when the user wants to create a custom schedule.
This feature has also received full support to run browsers such as Microsoft Edge with a Chromium base. Therefore, generally when you drag a text in Notepad, an option will automatically appear such as directly searching for the sentence in the browser, for example as shown below: 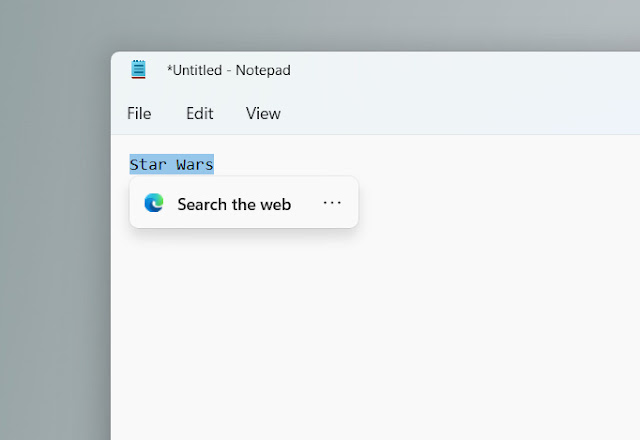 There are still many who still don't know the meaning of this feature, even though if used properly it will make it easier for us to search for a keyword directly from Notepad to the browser.
Especially for those using Windows 11 Insider Build 25247, it turns out that this version was granted access by Microsoft to enable the Suggested Actions feature directly to other browser services such as Google Chrome.
How do I enable it? You must use the help of tools from ViveTools which can now be accessed by entering special commands, more below:
After finishing entering commands via ViveTools, close the service and you can again try to open the Notepad feature and Drag the text you filled in. Automatically a search display will appear through the browser as below. 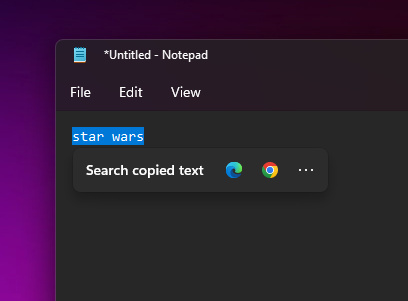 Easy, right? If you are an Insider Dev user then you can immediately try this feature easily, but you need to download the ViveTools application via GitHub if it is not already installed.
#Chrome #Microsoft
Share
Comment