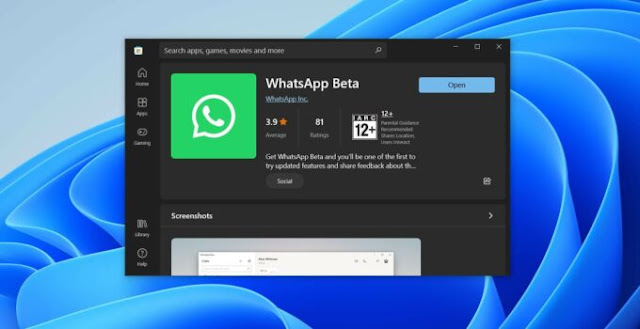 WhatsApp is becoming one of the popular applications today, getting the same support in Windows 11 where today get their latest update with a number of additional features. This Call feature can be used via Windows 11, Wednesday (30/11).
Meta as the company that houses WhatsApp seems to be starting to make small changes to their platform on this one, especially for those who use WhatsApp services directly from a Windows 11 PC.
Microsoft, which a few months ago provided their support with the release of Windows 11 22H2, is now again providing support to developers in UI acceleration of existing services in Windows 11 including WhatsApp.
WhatsApp now brings a UI adapted to the interface from Windows 11, where Meta makes a more friendly design with WinUI and Fluent Design that they have been using and using now.
Even so, this change is still in testing mode and can already be downloaded directly from the Microsoft Store service, WhatsApp beta will be the first version that will get the latest UI updates and feature support for Windows 11.
The Call feature has been leaked by Meta, where this feature will later appear for those who use WhatsApp directly from the WhatsApp application page on Windows 11. The service will feature new features similar to those in the iOS and Android versions.

As many already know, that the desktop version of WhatsApp is slightly different from the application directly on smartphones, where some features such as calls are not presented and can only be accessed using mobile phones and tablets.
But now, Windows 11 users will be the first device that will enjoy the Call feature on their desktop. The function itself is the same, where users can see a list of incoming and outgoing calls while using the WhatsApp service.
This also applies to those who have used the voice and video calling service, all of them will be listed in this view as when we see it in the Android and iOS versions. Interesting isn't it?
Meanwhile, WhatsApp has also just released their new feature through Message Yourself which provides additional feature support for saving messages on the WhatsApp platform.
#Whatsapp #Windows
Share
Comment