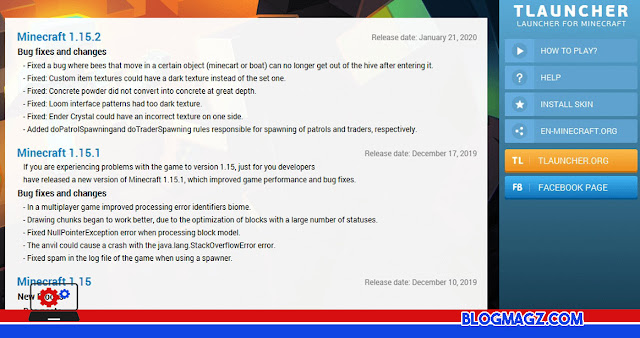 Blogmagz.com - TLauncher is a software for downloading and playing the Minecraft game on a PC screen, a legendary game that has always had a loyal fan community from children to adults.
The game allows players to create various buildings from blocks. The type of building depends on the player's imagination, some of which may surprise you. You know Los Santos in GTA? There are several Minecraft players who join into a group to create the city. Minecraft players' fanaticism towards the classic game is not limited to just building buildings. There are also players who have explored Minecraft for years just to find the end of the world.

Full Features of the Tlauncher App

There is a catalog of mods and maps, along with resource packs, each of which comes with a fairly complete description and is accompanied by screenshots.
Each mod you choose will be checked for compatibility by the modpack system implemented in TLauncher to prevent the risk of errors. If the error persists, there is still a backup provided by TLauncher.

TLauncher tries to keep its users safe by providing a protection feature called TLauncher Guard. Servers that are considered dangerous, or that have been blacklisted by Mojang, are blocked in TLauncher so that they cannot be accessed by users.
TLauncher Guard will also provide guidance on the steps you should take to protect your account, such as suggestions for using various characters in creating passwords, enabling the secret question option to tighten account security, and enabling two-step account verification.

TLauncher will automatically detect the memory capacity on the computer and then allocate a certain amount of memory to play the Minecraft game. You can set this memory allocation to be smaller or larger. Of course, the more memory you allocate, the smoother the game's performance will be when you play it.

TLauncher is free, but there is also a premium version that offers extra packages such as cloak, HD skin, ad-free, access to TLauncher servers for file downloads, and support to help you when you find problems.
One more thing, TLauncher requires Java to work. During installation, TLauncher will detect whether your computer already has Java and will provide the option to download Java if the detection shows a negative result. Download the latest and free TLauncher via the link below:
Download