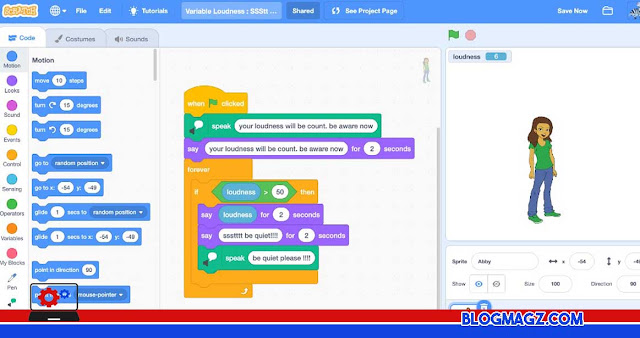 Scratch Offline Editor uses colored blocks that can be arranged with drag and drop methods to create simple games, to tell a story, to create animated birthday cards, or to create other artwork.

Scratch Offline Editor provides a variety of sprites to be programmed as desired. Sprites are two-dimensional images or objects that can be manipulated with one or more scripts.

There are various objects. The default object is a cat that appears every time you create a new project, while other objects are ballerinas, bats, apples, bananas, beetles, balloons, arrows, basketball, airplanes, women, men, and others.

Each block of code represents a command or action. For example, the 'move 10 steps' block indicates that the sprite must be moved to the right by as many as 10 spaces. There are several types of blocks for programming sprites and backdrops. Among them are as follows:

Events Block to execute a script in response to an event, such as a cat sprite that runs after the green flag is clicked or after the space button is pressed.

The image used as the background on Scratch Offline Editor is called a backdrop. You can use one of the backdrops that are already available in the gallery or use your own images. The installed backdrop can also be replaced at any time.

Scratch Offline Editor is a Scratch editor that can be used without an internet connection. To understand how to use it, there are a number of interesting tutorials available on scratch's official website. Each tutorial can be downloaded along with a guide document called 'Coding Cards'.

Coding Cards are PDF documents whose page sizes are made like cards. Each card contains instructions that must be executed step by step from start to finish.