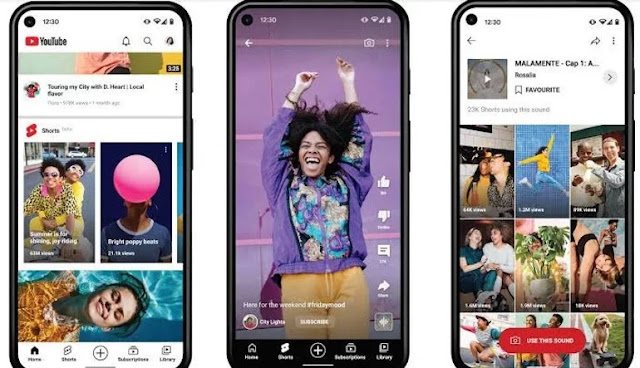 YouTube Shorts have indeed become one of the features that are widely used by content creators on the YouTube platform, this platform itself also provides many of their interesting features. YouTube Shorts will also be coming soon to Smart TVs or Android TVs, Tuesday (08/11).
YouTube through Shorts seems to be marketing their new feature very well, in August Google provided support for creators to use Shorts in marketing their content.
A content creator who uses YouTube Shorts is more likely to have a larger audience, as YouTube has used a different algorithm.
At first glance, this YouTube Shorts feature is indeed more like a combination of Stories on Instagram / Facebook and Short Videos on TikTok. It is likely that YouTube Shorts are indeed inspired by these two features.
A few days ago, YouTube has also overhauled views from YouTube which has now separated a collection of videos, Shorts and more when visiting a content creator's YouTube channel. So, it will look more neatly organized.
Today, YouTube Shorts announced that they will be coming to other versions of Android TV and Smart TVs, where the YouTube Shorts feature will be present just like when accessing video content on YouTube via TV.
According to Tod Sherman as Product Manager of YouTube, the data explained that YouTube Shorts users themselves increased rapidly by scoring 1.5 billion users.
Sherman also stated that in just over a month, YouTube Shorts users themselves can score up to 30 billion views just through the Shorts feature.
With this number, it is very likely that YouTube Shorts will become one of the competitors of TikTok, considering that the features they carry are indeed almost the same. YouTube, which regularly promotes the Shorts feature, is also seen to be providing a better future with their latest feature service.
This week, YouTube is ready to release YouTube Shorts for Smart TV users, so Smart TV users can directly access the YouTube Shorts app and watch random videos uploaded by creators on YouTube.
According to some reports, there are many YouTube creators who benefit from this. Because they can make a short snippet of the content of their long video, it becomes only 1 minute and arouses the curiosity of the viewer.
Sherman also added, that YouTube Shorts will not use a different UI, because the concept does follow a wider TV screen where YouTube Shorts only need algorithm adjustments.
#Youtube
Share
Comment