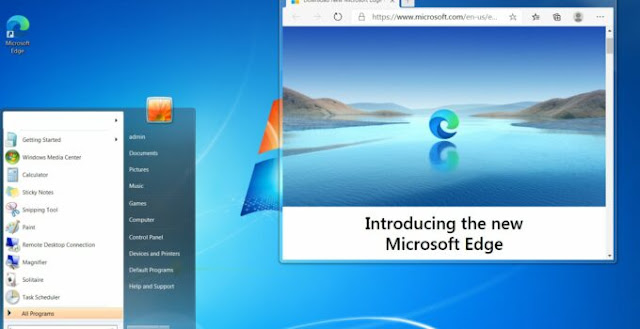 Yesterday, Chrome provided information in the form of an announcement that Windows 7 users are advised to move to the latest operating system from Windows, as they will stop support. The same thing apparently happened for Edge Chromium users, Friday (09/12).
Windows 7 users can be said to be one of the OS users from Microsoft who have survived for quite a long time, even though they have released the latest OS support starting from Windows 10 to now Windows 11. Windows 7 users still exist and don't seem to feel at home leaving their OS.
But this is certainly a barrier by those who want to use access to certain applications, such as browsers. There are many browser platforms that have begun to discontinue their support for running on Windows 7.
Not without reason, security system support is also one of the things that need to be considered both for the system and the browser service itself. Considering that browser services will certainly depend on the operating system used such as Windows 7.
Regarding security, in fact Windows 7 itself has experienced many security vulnerabilities that are worthy of attention, where Microsoft itself has indeed stopped their latest security update service.
It has been two years since Microsoft stopped supporting security system updates in Windows 7, therefore there are a lot of Vulnerability problems obtained by Windows 7 users.
The same seems to be soon felt by those who use Chromium-based Microsoft Edge in Windows 7, where it is officially announced in the Edge version Chromium 110 itself has eliminated support for Windows 7 and Windows 8.1.
This is not only the case for Chromium Edge users, but all browsers that use Chromium base which yesterday Google Chrome has also given a warning to Windows 7 users.
"Starting with Chromium 110, Windows 7, 8, and 8.1 will no longer be supported (Sunsetting support for Windows 7 / 8/8.1 in early 2023 – Google Chrome Community)." Write Microsoft Edge.
Meanwhile, Edge Chromium 110 itself presents many other interesting features such as improved features in the Sidebar and support for themes with dark mode.
#Chrome
Share
Comment