The idea of developing AirDroid Cast was to facilitate interaction between mobile devices and desktop computers. Without complicated procedures, the Android screen display can be sent to the PC screen and displayed in real time on that screen.
Through the PC screen, HP can be controlled using the mouse, for example for online shopping, installing games, deleting folders, renaming files, setting launchers, changing brightness levels, fiddling with HP configurations, and so on

Features and Advantages of AirDroid Cast 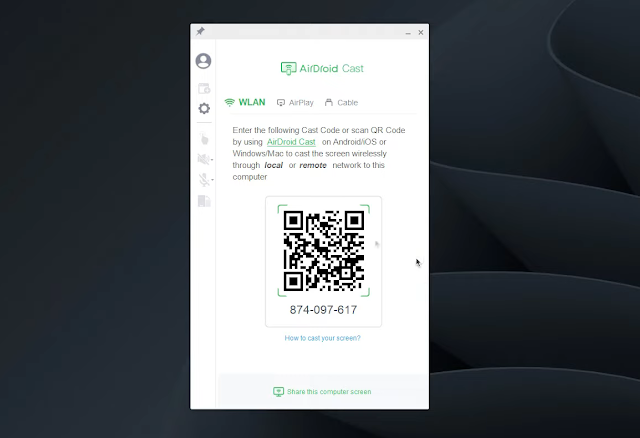 AirDroid Cast can be used for various purposes such as presentations, online courses, meetings, live streaming, and others. What are the forms of convenience offered by this software? Check out the following review.

Casting More Than One Device

Have more than one HP? AirDroid Cast can not only cast one HP screen. In total there are 5 cellphones whose screen contents can be displayed on a PC monitor easily. The five performed side by side so that they could all be seen at once at the same time. For certain purposes, this one feature can save time because there is no need for HP casting alternately.

Through the audio feature available in AirDroid Cast, online meetings can run smoothly because the software also allows meeting participants to talk to each other without having to be in one location.

What kind of casting method do you want? Whatever your choice, all the methods that AirDroid Cast provides are easy to use. One of the most practical is to scan a QR code.
This code appears on the PC screen to be scanned with the mobile device you want to cast. Under the QR code, a cast code is also included as an alternative to casting. So, if the QR code fails to be scanned due to unknown reasons, you can enter the cast code into the AirDroid Cast application installed on the cellphone.
There is still another way, which is to use a USB cable. This method is not as practical as the code input method, but the connection is more stable. Regarding the speed, it is not so different from other casting methods but this depends on many factors.

The ease of casting through a number of methods it provides is a major advantage of AirDroid Cast. Its ability to cast multiple screens is also no less interesting for users who have more than one mobile device or to facilitate certain presentations during meetings.
After downloading the AirDroid Cast software from the link we provide for Windows computers, don't forget to download the application version for your mobile device. Only devices in which AirDroid Cast is installed can be connected to each other. Download the latest and free AirDroid Cast for Windows via the link below:
DOWNLOAD
#Download
Share
Comment