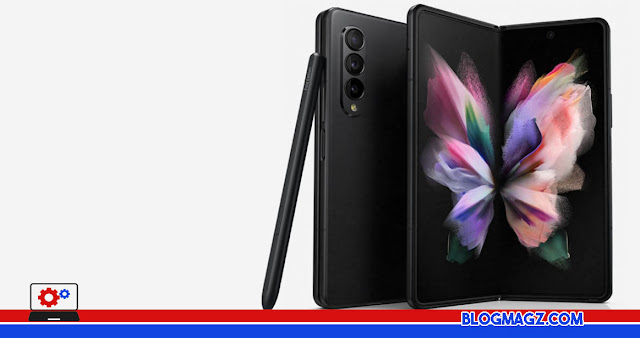 Blogmagz.com - Are you tired of using a mediocre smartphone? Or looking for a tablet? You can meet both of these needs just by buying one device, the Samsung Galaxy Z Fold 3.
The Galaxy Z Fold 3 is one of the best foldable phones available on the market. Z Fold 3 has some significant improvements compared to the previous generation. This phone is now more durable, can be used with the S Pen, and its multitasking features are also improved.
However, although it is priced quite expensive, this is fairly reasonable with all the advantages and sophistication it has. Therefore, this phone is not for consumers in general. For those who are interested, check out the full review below!

The quality of Samsung's flagship phones is unquestionable, including the Samsung Galaxy Z Fold 3. Here are the advantages of this best folding mobile phone:

1. Extra Screen That Makes It Free

Both screens are OLED screens. The front screen has a standard size of 6.2 inches. However, what definitely caught people's attention was the 7.6-inch deep screen.
The large screen makes the Galaxy Z Fold 3 very suitable for watching. In addition, the screen also has a 120Hz refresh rate, which makes the screen appearance very smooth.

In addition to the large screen, Z Fold 3 is indeed made to support multitasking. The inner screen of this phone greatly increases your productivity.
Using this phone when open makes everything easy. When open, you can open two to three apps at the same time. You can also create shortcuts to open two applications according to the last time it was closed.

3. S Pen That Is Not Just There

If you like to take notes or draw, this phone is perfect for you. Samsung Galaxy Z Fold 3 supports the use of the S Pen.
With a large screen and S Pen, your recording or drawing experience becomes more comfortable. This S Pen is also made with quality materials, so it will not scratch your device screen.

Samsung's previous generation of folding phones was a fairly heavy folding phone. Making a waterproof foldable phone is also a difficult thing. However, both shortcomings no longer exist.
Samsung Galaxy Z Fold 3 now uses a more durable material and makes this device lighter than the previous fold generation. Plus, this folding phone is already waterproof.

Samsung Galaxy Z Fold 3 you can use as a phone as well as a tablet. So, it is natural that this device has a fairly high price.
However, Samsung has made the Z Fold 3 cheaper than the Z Fold 2 at the time of its release. You can also save by exchanging your old Samsung phone, as long as the offer is still available.

The Samsung brand is famous for its modern, sleek, and contemporary design. The phones look sophisticated and quality, including the Samsung Galaxy Z Fold 3.
Samsung has made this device slimmer and lighter than the previous generation. The folding features of the Z Fold 3 also make this phone very unique.

Because the Samsung Galaxy Z Fold 3 is a phone that supports multitasking, this phone also needs to be equipped with a powerful chipset.
This current smartphone is equipped with a Snapdragon 888 chipset and has 12GB of RAM. Therefore, you don't have to worry about its performance.

With a unique screen feature, this folding phone also has software that is slightly different from other phones. Some apps need to be customized with a 7.6-inch screen.
Fortunately, the software of Samsung's Fold series has undergone improvements. Most of the apps have been customized and can work well on a large screen.

There are also some shortcomings still owned by the Samsung Galaxy Z Fold 3, which may still be 'forgiven' by users:

9. The camera is inside

The selfie camera on the inner screen is located under the screen so that it does not appear. However, when the screen is displaying something bright or has a white background, the front camera begins to look and can interfere with your attention.
The quality is also quite low. But this is not a problem because you can use the selfie camera from the front screen.

Although this phone is still thicker than the average phone, the Samsung Galaxy Z Fold 3 has been made with a slimmer design than the previous generation.
However, this slimmer design resulted in the battery of this phone becoming smaller. With a large screen, 120Hz refresh rate, and multitasking features, the battery life is certainly not as strong as other phones, but enough for your daily activities.

Well, that's a review of the Samsung Galaxy Z Fold 3, a versatile and unique smartphone. However, due to its unique features and high price tag, this phone is not necessarily suitable for everyone.
#Android
Share
Comment