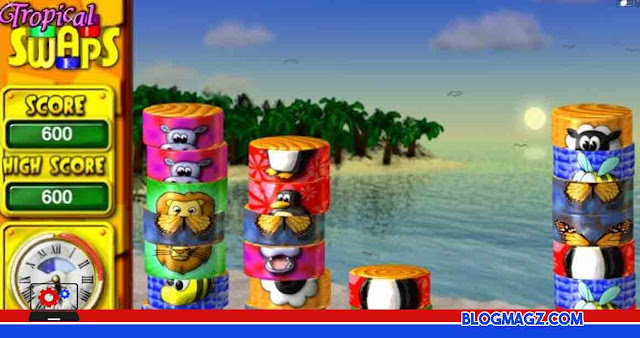 Tropical Swaps is a game that can treat your boredom by finding and matching cute cartoon pictures. Each image will produce a distinctive sound effect after you complete it so that the cheerful atmosphere is even more thick.
The pictures appear in the form of stacked flat plates. An image can be divided into two or more slabs that must be put together so that the image becomes a whole.

Getting to know Tropical Swaps Game

Action is one of the Tropical Swaps game modes that you have to play anyway. The reason is, the other two modes are locked from the start and will only be unlocked after your adventure in Action mode.
The two modes are Endurance which tests how far you can survive and Combo Challenge which challenges you to make as many and as big combos as possible.
Action itself is a game mode that consists of many levels but each level is given a time limit. When the time limit is running out, you will be given a warning to finish the game immediately.
In each mode, the Tropical Swaps game room is decorated with flat slabs each displaying a fragment of an image. The pictures vary. There are pictures of monkeys, bees, butterflies, sheep, crocodiles, lions, bananas, and frogs.
Each of the images mentioned above is divided into two plates, while those that are divided into three plates are images of snakes, birds, and giraffes. Most of the pictures you can match by arranging the plates vertically, while the rest must be matched horizontally like the crocodile and snake pictures.
To arrange the slabs, click on one of the slabs, then hover over the other slabs, and click once more over the slabs to drop the slabs you are carrying. To spice up the game, sometimes a bonus slab made of glass appears. Such a slab must be destroyed to get the bonus it provides.
In the bonus level called Super Smash, these transparent plates also appear along with several illustrated plates. There you need to find a way to destroy all the transparent slabs using a limited number of pictorial slabs.

Tropical Swaps provides a panic button as a shortcut to get out of unfavorable situations. The help that appears after you press the button can be a bomb dropped on a slab or extra time. Once the panic button is used, it will no longer work for a while, so use it as wisely as possible.
Another form of assistance is called a Reserve, which is a box that holds several picture plates in reserve. When you do not find a suitable plate in the arena, then you can take the plate that is in the Reserve. Download the latest and free Tropical Swaps game for Windows PC via the link below:
DOWNLOAD NOW
#Download
Share
Comment