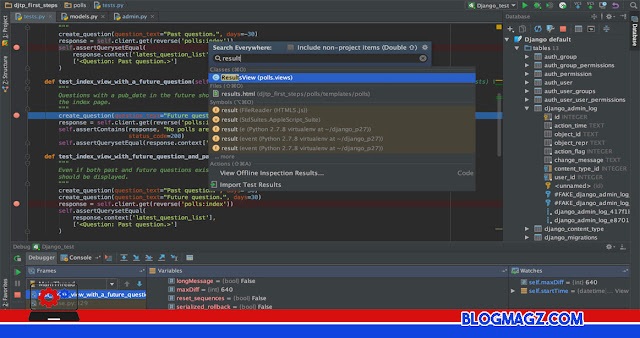 PyCharm is an IDE (Integrated Development Environment) that can be used to develop Python-based applications, with this feature you as a developer can easily write code much more efficiently. This feature is equipped with an auto-correction feature, so you can minimize the occurrence of errors in writing code.
The features of this IDE itself are very many, which will provide a suggestion to overcome errors, the availability of modules that can be used, manage the files needed by a program, to check the output of the code you have written.
By using PyCharm, you can easily write Python language in a program or application with IDE features that minimize the occurrence of errors or errors when writing code. In addition, PyCharm also supports being able to develop a Website using Django.
Interesting and efficient isn't it? Well, here we summarize some other interesting advantages of this PyCharm software, see below:

PyCharm provides a lot of tools to integrate, its uses are also various that you use as needed, one of which is Anaconda. Anaconda is a tool that serves to direct scientific computing with a simplified management and package. to the Phylint feature that serves as source code, bugs, and checks the quality of the code.

PyCharm offers smart code analysis that you can use to facilitate quality Python code, this can be seen from the level of readability using color scheme codes that represent the keywords, classes, and functions of each code.

PyCharm is equipped with an additional feature, namely the Scientific Library. With this feature, you will be greatly helped by the development of the Python programming language, by looking for references from various sources such as Matplotlib and SciPy.

This feature can be used to target platforms with public computing, which is used to host a website. However, you can only use this feature in PyCharm Professional mode only, you can upgrade by subscription.

Therefore, for those of you who want to manage and develop a Python programming language, then we recommend using PyCharm. Using PyCharm, you can easily develop python language with the help of some of its very capable features.
You can easily use this software, especially for those of you who have special skills in understanding the Python programming language. Download the latest and free PyCharm for Windows via the link below:
DOWNLOAD
#Download
Share
Comment